Covering the Latest and Greatest in Logistics and Technology, by Benjamin Gordon, Cambridge Capital

“Amateurs talk strategy. Professionals talk logistics.” The last American 5-star General, Omar N. Bradley, is said to have made this declaration after leading the Allies to victory in World War II. Since then, logistics has become more important than ever.

Why does logistics matter?

In the military, successful logistics has proven the difference between winning and losing. Hitler’s debacle began when he overstretched his supply lines during the winter of his Russian invasion. General Tommy Franks’ lightning defeat of Saddam Hussein hinged on his success in creating a logistics infrastructure that supported a rapid strike force executing his motto: “Speed kills… the enemy!”

In business, logistics skill has been the royal road to career advancement. Before he became CEO of Apple, Tim Cook ran Compaq’s supply chain. Before she became the CEO of General Motors, Mary Barra was its Executive Vice President of Global Product Development, Purchasing & Supply Chain. And before he ran Procter & Gamble, A.G. Lafley was a U.S. Navy supply officer. Meanwhile, logistics has become an engine of growth, driving job creation throughout the economy.

In technology, logistics plays a more important role than ever. There are at least 28 unicorns in logistics today. They include:

Meanwhile, logistics has gone global. It is believed that at least as many unicorns have emerged in Asia, Latin America, and Europe. And Israel, the “Startup Nation,” has become a logtech hub.

Powerful logistics, previously considered a stepchild of industry, is now recognized as a key success driver.

How did we get here, and where are we headed?

The first wave of supply chain value creation came in the 19th century, with the advent of the steam engine-powered railroad.

In 1869, Leland Stanford drove the Golden Spike into the ground in Utah, completing the track for the first coast-to-coast railroad. Stanford’s breakthrough ushered in an era of wealth creation for those who early on recognized the value of railroads to industry. Fortunes were built by the Vanderbilts, Carnegies, Goulds and Flaglers, all owners of major railroads. But they were not the only beneficiaries. Low-cost rail shipping also powered the rise of titans like John D. Rockefeller, who used the infrastructure to distribute the products of his Standard Oil empire.

Almost a century later, on the seas, a second innovation would fuel a new wave of growth. In 1956, Malcolm McLean refitted an oil tanker to carry 58 shipping containers from Newark to Houston. His container ship fleet spearheaded massive change throughout the industry. His innovation allowed shipping empires to emerge, concentrated in the hands of giants like Maersk. Trucking companies arose to transport these containers from the oceans across nations, fueling the rise of empires like those of J.B. Hunt. The same container revolution today enables retailers like Walmart to take advantage of low-cost manufacturing in China, massively distributing foreign products to domestic markets. Without McLean, there might be no Walmart as we know it today.

Today, we are entering the third wave of value creation in logistics and supply chain. Technology companies rely on logistics to keep their promises, the shining example of which is “next day delivery.” Amazon may have made Jeff Bezos the richest man in the world, but his company would not have succeeded if it could not deliver reliably in the promised time. In turn, the “Amazon Effect” has generated a far-flung ecosystem in automation, e-commerce fulfillment, and the digital supply chain.

Robotics is a case in point. In 2012, Amazon bought a warehouse robotics company, Kiva, for $775 million, marking the 2nd-most-expensive acquisition in its history to date. This month, Shopify acquired 6 River Systems for $450 million to challenge Amazon on this same turf.

Ecommerce fulfillment is a second illustration of the increasingly recognized value of supply chain innovation. On the one hand, disruptors like ShipBob are using technology to provide lower-cost e-commerce fulfillment solutions. On the other hand, consolidators like Radial Commerce are deploying capital to acquire competitors and pursue global scale.

If you have any lingering doubt about the convergence of technology and logistics, ask FedEx CEO Fred Smith. FedEx stock plunged 13% after its Q3 results call last week, which included an explanation of a decline believed to be fueled by ending an Amazon contract, where he included his former customer as a competitor, telling shareholders, “we basically compete in an ecosphere that’s got five entities in it. There’s UPS, there’s DHL, there’s the U.S. Postal Service, and now increasingly, there’s Amazon.”

In sum, we are entering a phase where logistics is more important than ever. You need to know about supply chains if you work in business, if you use technology, if you care about the economy, if you invest, or if you simply want to understand your world. Logistics has become intertwined with everything we do.

What can we expect going forward?

How will logistics and transport evolve, and what should you care about most? These questions will be the focus of Supply Chains, covering the themes and trends critical to our future. Below, we illustrate eight issues, courtesy of Cambridge Capital, investors in transportation and logistics. 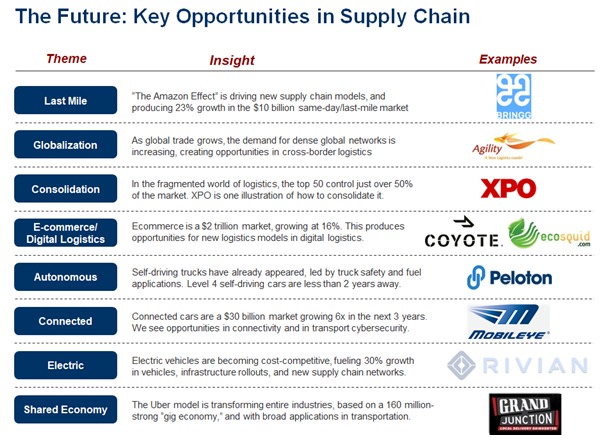 We see the first topic, last-mile logistics, as a crucial battleground. Winners are deploying robotics, drones, and other technologies. Every ecommerce company needs a last-mile solution, not only to compete with Amazon, but also to address the evolving customer expectation for same-day fulfillment. This produces opportunities in logistics, technology, and a host of related services.

In the coming months and years, I hope you will come to view Supply Chains as a trusted partner and resource, helping you to see sooner and further into the future of logistics, to learn, and to contribute your analysis and insights. The essence of supply chains is that by collaborating, and cooperative we all benefit. A rising tide raises all ships. I look forward to fulfilling that vision — and perhaps rocking the boat — together.